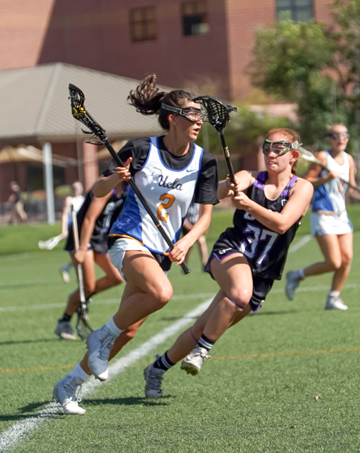 The seeds held true on day one of the WWLL Championships.  The #1 & #2 seeded teams UC San Diego and Cal State San Marcos both won their semifinals and will play for the WWLL Division Two championship on Sunday.  The top two seeds in Division One had to battle through quarterfinals and semifinals on Saturday but persevered.  Top seeded UCLA will face the club from ASU, the #2 seed.

In the first quarterfinal of the day 8th seed and host team Grand Canyon University kept it interesting with #1 UCLA the whole game before eventually the Bruins persevered 10-8.  The Lopes played their best game of the year when the chips were down but UCLA finished with some ball control to preserve the win.  Fifth seeded Santa Clara similarly fought hard but fell to the club from San Diego State in the other quarterfinal on the same side of the bracket as UCLA.  That set up a semifinal between the Aztecs and UCLA, who had their closest game of the WWLL season with this club from SDSU.  Again the Bruins played well enough to win and advanced with a 16-13 victory.

On the other side of the D1 bracket the club from ASU played University of Arizona for the second time in seven days and won 20-4 to easily advance to the semifinals.  Cal Poly had it a little tougher in their 13-7 win over the club from UC Davis.  The resulting semifinal between the Sun Devils and Cal Poly was close through most of the first half but then ASU distanced themselves and won 14-9.

Division Two teams come to play in a final four team bracket for this event and they played in the afternoon time slots. The #1 UC San Diego and #2 Cal State San Marcos squads summarily dispatched their matchups on a march to a repeat of a regular season game between them. This time they will play for the WWLL D2 Championship.  UCSD won 17-4 over Cal Poly SLO B and Cal State San Marcos was successful 14-7 over UC Santa Cruz.  Both the Tritons and the Cougars play in WWLL South D2. UCSD won narrowly 12-11 in their game on March 6th. The winner this time gets the crown and also the WCLA National Championship Tournament automatic qualifier (AQ) spot.

ASU and UCLA have not played this year so the D 1 final features two teams that have only scouted each other but not yet matched up on the field. The game is intriguing in that sense with both vying for first place and the national implications of being a top five seed in the WCLA National Championship Tournament, or not, also factor into the result.