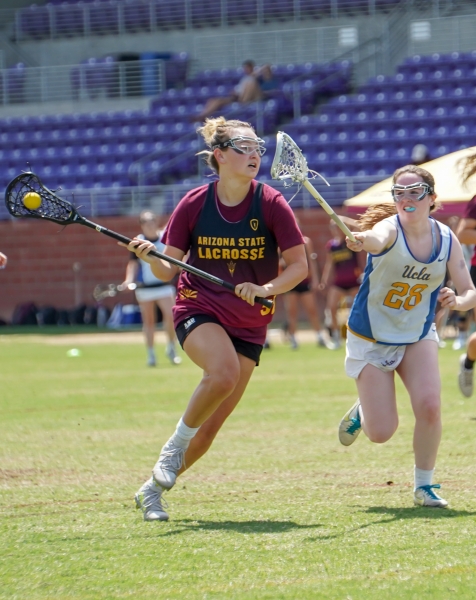 UCLA and the club from ASU were two teams on a collision course to play each other in the WWLL D1 Championship Game.  The Bruins and the Sun Devils had not played each other in the regular season.  Both had emerged unscathed through WWLL quarterfinals and semifinals to meet in the final.  Both teams played at a championship level but their defense won it for ASU.

UCLA scored the first goal. Bruins senior Katie Larratt (Coronado, CA) passed inside to Kailyn McCullough (Severna Park, MD) who caught it righty and switched to her left to sting the bottom right corner.  Offense from ASU didn’t take long but it did take a while to score. The Sun Devils shot four times on their first possession but were empty handed after wide shots and two saves by UCLA goalie Naomi Moskowitz (Oakland, CA).  Then on the next Sun Devils attacking possession freshman Lesha Karaba (Philadelphia, PA) dodged from behind and pulled off a rocker move to lose her defender just above goal line extended. The attacker notched an unassisted goal to tie it 1-1.

After it took them more than 7 minutes to get their first goal ASU mostly took over game on their way to their 11-6 win except for one surge by the Bruins toward the end of the third quarter.  The score was 7-3 in favor of the Sun Devils at halftime before they eventually won by five goals.  It is the first WWLL Championship for the club from ASU.

Late in the second quarter it looked like the halftime score was going to be five goals for the Sun Devils but UCLA attacker Charlotte Hussey (Norwalk, CT) split a double team. The junior scored unassisted to get the Bruins to within four goals with four seconds on the clock.  All game ASU was quick to slide and rotate their defense.  Double teams and second slides are what the UCLA offense kept facing every time they were on attack.

A yellow card on ASU 11:56 into the third quarter and then another yellow card on ASU just 13 seconds later gave UCLA a 7 versus 5 players up opportunity.  Still the Sun Devils held.  Toward the end of that two minute releasable penalty period a UCLA shot that went in was called no goal for a crease violation. That kept the score 7-3 in favor of the Sun Devils during the entire player up sequence.  A midfield turnover by ASU facing the Bruins zone ride on the ensuing clear and UCLA had the ball again.  After all that time ASU defending with only five players it was back to even strength.  The Bruins scored this time.  A UCLA pass from Hussey to Macy Anderson (Novato, CA) gave the Bruins a goal and it was 7-4.

ASU won the draw control but then faced a revved up UCLA defense coming out of a timeout adjustment.  Now the Bruins were pressuring out and working hard to get their own double teams.  UCLA goalie Moskowitz came out of the crease and intercepted an ASU pass and on this Bruins possession freshman Ainsley McCabe (Arlington, VA) scored on an 8 meter free position attempt with 4:44 left in the third quarter.  The Bruins had pulled to within two goals.

UCLA doubled on the next ASU drive to goal and came up with the ball and made it 7-6 on that possession when Larratt scored unassisted to make it a one goal game with 3:43 left in the third period.  Back and forth play through the midfield earned UCLA the ball but the one look inside they could get didn’t result in a shot.  The fourth quarter started with ASU only up by one goal but the Sun Devils went on to hold the Bruins scoreless for the quarter to get the win.  UCLA had chances the rest of the way but couldn't solve the Sun Devils defense.

The Bruins won the first draw of the fourth quarter on a loose ball foul by ASU but their settled offense pass inside was tipped and then intercepted.  That defensive play resulted in a chance for Sun Devils freshman Briana Gardiner (Chicago, IL) to get a pass from freshman Caroline Kelly (Souderton, PA) for the first goal of the fourth quarter to put ASU up 8-6.  It was the first goal of a 4-0 fourth quarter run by the Sun Devils.  During that run timely saves by ASU goalie Alex Labrosse (Amherst, NH)  kept the Bruins from scoring on several looks at the cage, including a Labrosse save on a UCLA 8 meter free position attempt from the center hash.  After that Labrosse save ASU broke the UCLA midfield zone ride and and a long pass to Caroline Kelly (Souderton, PA) became a breakaway. The wide open attacker Kelly finished her opportunity by throwing two fakes and placing her shot off-hip to give ASU a 9-6 lead.

A Sun Devils stick on defense knocked down a UCLA pass and after a series of short ASU passes through the midfield this time a UCLA foul gave sophomore Jaiden Stepnowsky (San Diego, CA) a free position shot and she buried it to give ASU a 10-6 lead with 7:48 left in the game.  The UCLA ride got them the ball several times but their passes inside on offense constantly met with an ASU stick tipping it or such tight marking after the catch they couldn’t take a shot.  At that point in the game with less than three minutes left and down four goals UCLA needed every pass inside to result in a shot and every shot to be a goal but ASU played everything so well on defense it didn't happen.  On the next ASU steal and possession sophomore Kaleigh Olla (Danville, CA) picked up a rebounded shot and scored tight on the crease to give ASU the final 11-6 lead with 1:24 left in the game.

The sixth ranked nationally Sun Devils improved to 14-0 overall and will play in the WCLA National Championships in Round Rock, Texas on May 4th – 7th.  UCLA, 9th ranked in the nation, dropped to 10-3 overall and are strong candidates for an at-large spot at Nationals.  The Bruins other two losses have come to current #1 Georgia and #2 Boston College.